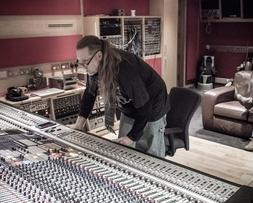 Darren is also Colorado's #1 Classical Guitarist and a versatile studio session guitarist. He has studied and performed on guitar for 25 years. He reached #8 and #11 on the Billboard’s Top Classical Chart and his original composition “Rondo For Michael” was the #6 most requested selection on the most listened to radio station in the world, Beethoven Radio. He has sold more than 100,000 copies of his 10 solo cd's. Darren is the owner and chief engineer at CCM Studios as well as a producer and artist in his own right. Darren has been recording, writing, and producing for 30 years. Establishing the studio in 1995, Darren’s credits now include 2 Billboard charting CD’s that he wrote, produced, and engineered, a Coalition Of Visionary Retailers Award for his music Acoustitherapy, and hundreds of sessions and projects. Darren has a Bachelor’s Degree in Music with concentrations in recording, composition, and guitar performance from The University Of Minnesota, Moorhead and spent several years touring nationally with progressive rock band Mata Hari as well as classical guitar and violin duo Watson & Company. Darren has recorded projects as diverse as classical to hip hop, metal to jazz as well as corporate work like music for video and voice over.

Darren Skanson's compositions stretch the breadth of Country to Classical and Spanish guitar to traditional songwriting to modern works for film and TV.  Whether songwriting, classical composition, film scoring, audio logos, or MIDI production music, Darren is at home in any of them. He was the composer and audio engineer for the TV series Shoot! and his music has been featured by Shutterfly and Belco Credit Union. Darren has also had 3 songs put on hold by Nashville's Sony/Universal as well as Luke Bryan.

Executive Producer Chad Bardon of the TV show Shoot Colorado who has been working directly with Darren had this to say:"Darren is the ultimate professional. I don't know if you ever saw a movie before they added the music...typically music really punctuates all the visuals in any film or television show. That's just what we experienced with Darren's music and special effects. It has made all the difference in the world in how our viewers are going to experience the SHOOT! series. We are very happy with his efforts. If you need a true sound professional, Darren Skanson is the guy to call!"